MY BLOG HAS MOVED

I've moved my blog to Wordpress so it ties in neatly with my website www.nannakoekoek.com. Please visit me there!
Posted by nanna 0 comments

Some superquick watercolor sketches I did the other day. Click to enlarge. 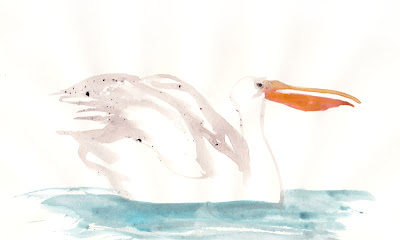 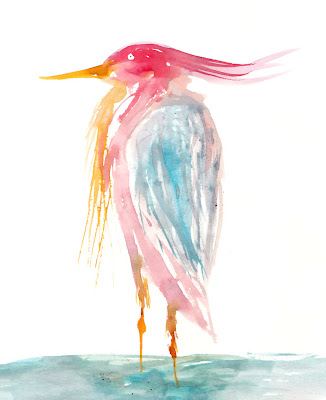 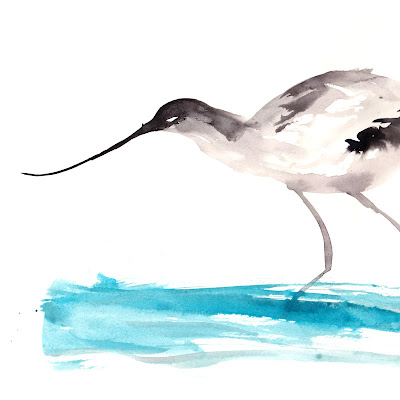 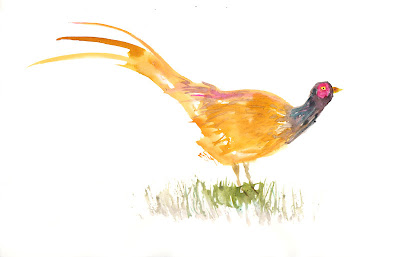 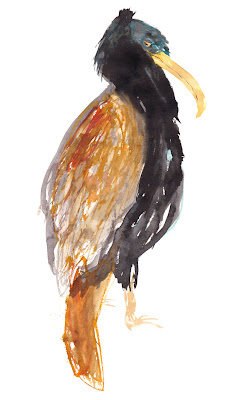 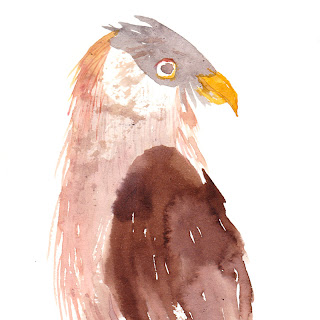 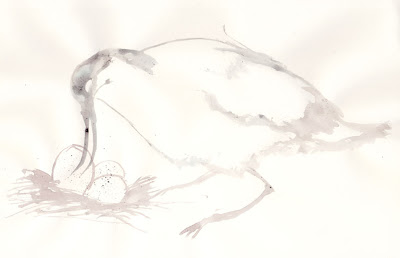 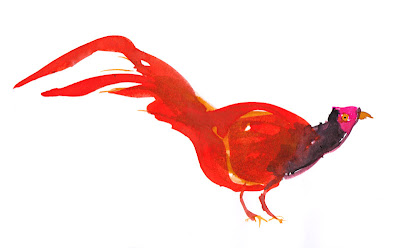 The King of Calypso and Mama Africa 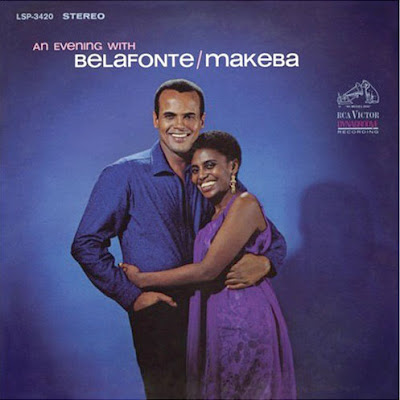 Yesterday I bought this 1965 Grammy award winning album by Harry Belafonte and Miriam Makeba in a charity shop. I greatly admire the American/Jamaican "King of Calypso" Harry Belafonte, not only for being a great singer, but also for his relentless fight for human right issues. And same goes for the late South African "Mama Africa" Miriam Makeba (who's song Pata Pata you'll surely know). On this album they joined forces to call attention to life under apartheid in South Africa. Song titles include Beware, Verwoerd! ("A warning to the Prime Minister of South Africa that the black man is on the move" it reads on the back sleeve), Give Us Our  Land and Hurry, Mama, Hurry ("Hurry, mama, and hide - the police are on their way"). There are a few African traditionals on there as well, sung in Xhosa, Zulu and Swahili. It is possibly the most beautiful protest album ever made. My favorite track by far is this duet, absolutely fantastic.

This song by duo MS MR has been stuck on repeat here for some weeks now. It's one of those bands that doesn't release any photos or information on themselves to try to make themselves more intriguing and mysterious. Right.. *sigh* The video doesn't give away anything either. So all I know they're from New York and that this song is ace.

Download the song here, or  if the link is expired fill in your email address and get it here.

The video reminded me of the vid my friend Anita Sharma made for Bart Constant back in April (and in my opinion it fits the song much better than the MS MR one). This song is ace too.

Like I said in my previous post, it does occasionally rain in northern Spain. So when the forecast predicted not so nice weather in Santander, we decided to leave our friends for a few days to travel south to the area of La Rioja. Sometime last year I  had read an article in Easyjet's inflight magazine (of all places..) about the amazing architecture of some of the wineries in that region. I had kept a copy and with its help we mapped out a route for our little road trip.

After spending the night in a charming posada in the (extremely) sleepy village of Sajazarra (there was not even a shop in this village, but at 8.30 am a man drove through the village blaring through a megaphone that he was selling melons from his trunk) we had our first tour and wine tasting at 10 am at Bodegas López de Heredia Viña Tondonia. Architecturally not the most exciting winery (only the reception slash tasting room has a futuristic, decanter-shaped design), but our friends (and Easyjet) recommended the place because it's one of the oldest wineries in the region and they still make wine the traditional way. 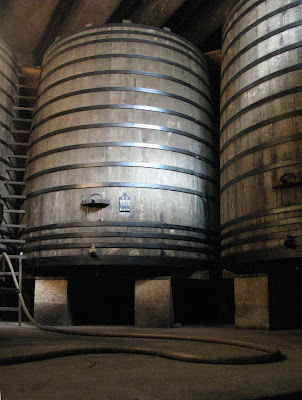 I'm glad we made this our first stop, because we learned a lot about the process of wine making and the natural conditions that influence it (temperature, the wood and age of the barrels, humidity, mold and spiders). I was very impressed (and at the same time disgusted) by all the mold that covers the walls. It works as a form of insulation that keeps the temperature and humidity in check. 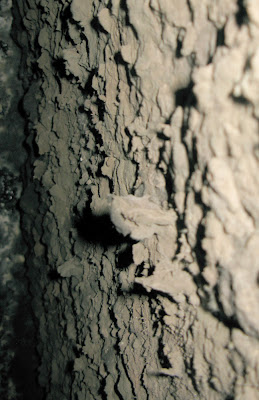 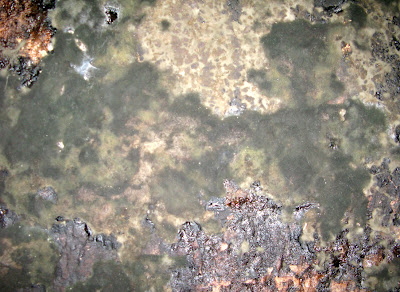 They make some unique white wines, that are well worth a taste. Best thing is the tour will cost you €10, but when you buy a bottle they'll give you a €10 discount on showing them your ticket. So we left, after being entertained and educated for an hour and a half, had two free glasses of wine, with two bottles of wine that had cost us €2,50!

After about a half an hour drive we reached Marqués de Riscal in the village of Elciego, in the Basque country. It is well known for the building designed by Frank Gehry (opened in 2006). The colors reflect the colors of the wine and bottles (silver and gold). The story goes Gehry was apprehensive at first, but was convinced to work for them after they had opened a bottle from the year he was born, 1929. 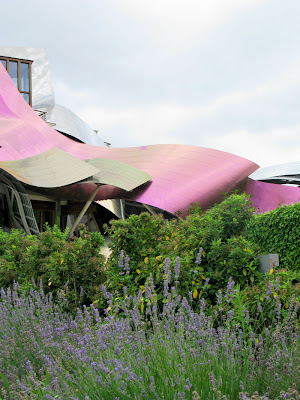 ∧ I couldn't even get a decent photo of the whole building because they were cleaning the titanium  (!) plates with a cherry picker :-(

Gehry's building is a hotel, restaurant, bistro and spa. Unless you're staying at this luxury hotel or have a (Michelin starred) meal or have a vinotherapy (pfff!) here you can't get nearer than where I took my picture. The winery itself is housed in far less interesting buildings and is much more like a factory really, with massive halls filled with massive stainless steel tanks.

By inviting Gehry they hoped the building would do for the winery what the Guggenheim did for Bilbao. And I think it has worked... The places was heaving. There were about 30 people on the tour, which started by showing us an awful corporate film. In all the whole experience was a bit of a disappointment. But I would love to go back and have their tasting menu in the more affordable bistro, to get a closer look at the building, and to sample their chickpea stew with monkfish and clams and meat balls with truffle.

That afternoon we continued our roadtrip by driving in a south-western direction towards the region of Ribera del Duero. It was a long but beautiful drive that took us through green hills, rocky canyons, passing clear blue lakes and over vast planes. The next day we had booked a tour and tasting at Bodega Portia. Their brand new building (2010) has been designed by the British architect Norman Foster (also know for 'The Gherkin' in London). 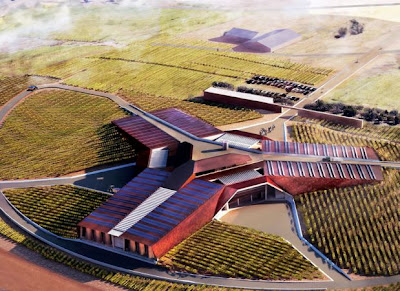 Now this was truly an impressive design, where the building has been fully integrated with process of the wine making and the rest of the corporate design. The building is a three-legged star, and in each of the wings one stage of the wine making process takes place: vinification, fermentation and aging. When the grapes have been harvested the trucks drive up the slope to the top of the building where they off load the grapes by dumping them onto a corkscrew sort of devise that transports the grapes to a lower level without them being crushed. Amazing! Inside the small windows (which are at ground level) provide a wine colored glow. There's also a restaurant with a beautiful outside seating area where you can have lunch or just a coffee. 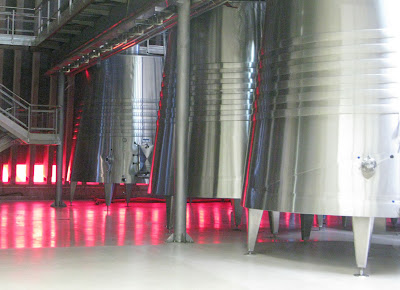 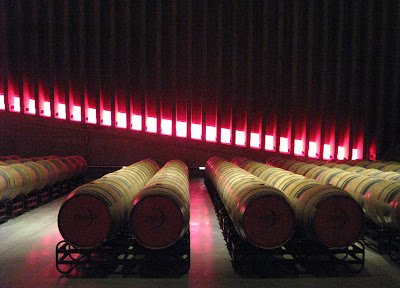 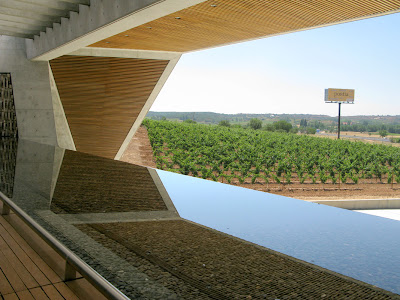 There are many more wineries with impressive architecture in La Rioja and surrounding areas and I'd love to go back and visit some more. It's just such a tasteful combination.
Posted by nanna 0 comments

Sorry for the lack of posts! I escaped the grey skies and went on holiday to Northern Spain to visit friends in Santander. I was very happy to see my friends again and to catch a bit of warmth and sunshine (though Northern Spain isn't as hot as you might think, the weather is pretty temperamental and they do get quite a bit of rain. Which means it's very green; the landscape is just stunning!)

We started off our trip in Bilbao. Best things: €1.20 for a glass of good wine and the pinxtos, sort of like the Basque version of tapas. They are served on the top of the bar and you just have your pick. Most of them include ham, seafood and/or tortilla. Mmmm!! 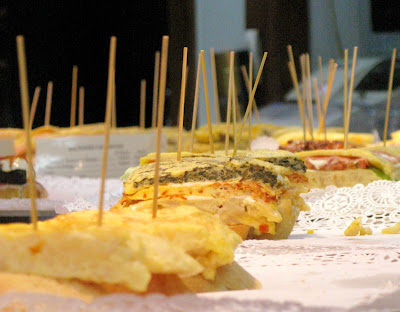 Equally as good are the museums in Bilbao. Of course The Guggenheim is the most famous, but we also enjoyed the Fine Arts Museum, where we visited an exhibition of etchings by Goya (entrance is free on Wednesdays!). 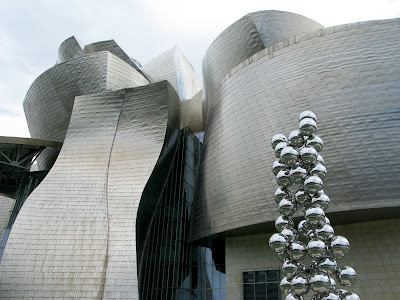 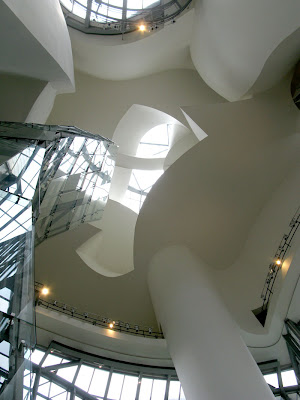 ∧ Frank Gehry's Guggenheim is worth a visit no matter what's on. But as it happened David Hockney's exhibition A Bigger Picture was on show! I had missed this exhibition at the Royal Academy in London, so I was thrilled that I was offered a second chance.

The exhibition focuses on Hockney's fascination with the landscape. It shows his latest iPad paintings, as well as older works that has lead up to these works. Over the last 10 years Hockney, who has lived in California since the 1960s, has spent a lot of time capturing the scenery of his native Yorkshire. I was especially impressed by the watercolors he did there. He has a great technique and the colors are so vibrant for watercolor. It was also amazing to see that he used a gadget like the iPad for a theme that is so traditional as the landscape, and that he managed to paint on the iPad in the same way as he would on canvas; they are undoubtedly Hockneys.

A few of his (large format) watercolor sketchbooks were on display as well. I personally find it difficult to draw or paint the 'bigger picture' (landscapes, rooms, environments in general) and I found his sketchbooks so inspirational that I bought A Yorkshire Sketchbook. The sketches are quite simple, but very effective and convincing. 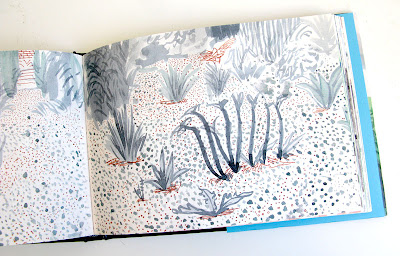 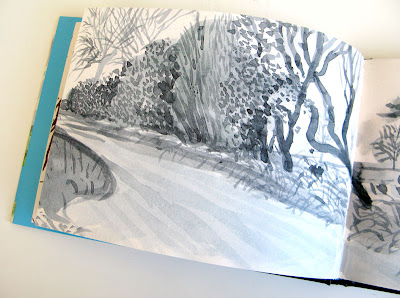 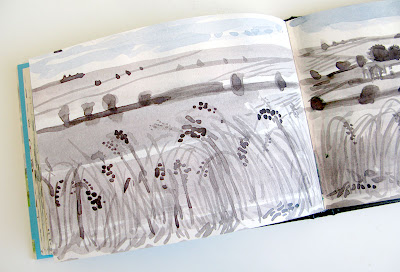 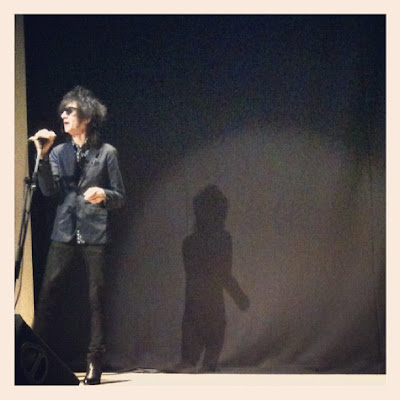 Last night I went to see 'punk poet' John Cooper Clarke at The Gate in Cardiff (great venue by the way, a former church). He is like the Busta Rhymes of poetry, he spits really fast! He is also known for his huge hair and for having toured with The Fall, The Sex Pistols, Siouxsie and the Banshees and Joy Division. He plays himself in Anton Corbijn's Control, opening for Joy Div as he did in 1977. Here he is in the video for Transmission (1979):

I really enjoyed it, especially the first half was extremely funny and he performed a few of his 'greatest hits' at the end. I also really enjoyed 'support act' Mike Garry, who's poems are almost exclusively odes to his city Manchester and its residents.
Posted by nanna 0 comments